Great weather today for a long run.  It was in the low 60’s here and cloudy.  Rain was threatening but kept to the South. 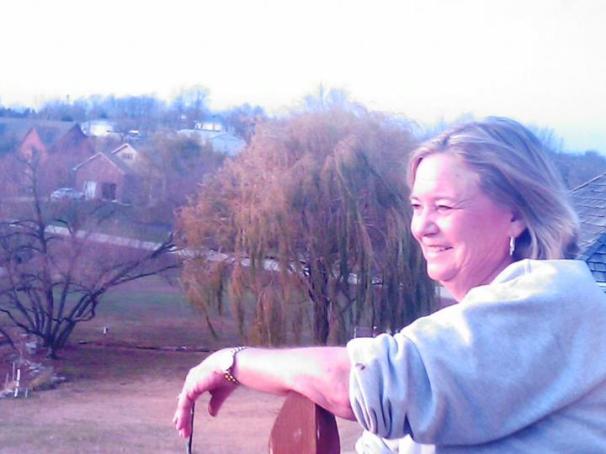 I met up with my sister Dolores at her house around 6 am.  Above is a picture of her that I took last fall.  After we went for a walk in her neighborhood.

We rode out to the trail together.  She took her bike and I had my running shoes and Camelbak.  As we passed mile 3 I could hear a lot of gunfire.  Not feeling too secure as I ran on the trail.  Got past that and moved on.

As we neared Hartsburg, a rain storm was threatening so we stopped there to wait.  Dad used to tell us not to be on the trail in heavy rain.  It could be treacherous.  Water rushes down off the bluffs in some areas and gullies fill fast.

We sat outside of Dotty’s Cafe and listened to the string band that was performing inside.  Pretty cool.  Hartsburg is a great place.

I ran with a brace on my left knee for support.  I think the problem was my IT Band but the brace did help too.  I have been rolling this bar over the IT Band a lot yesterday and today.   Also worked on it while we stopped at Dotty’s.  It hurts to do it but it helps make the band more flexible – not quite so tight.

Also, I picked up a large roller and using it 3x a day – 3 rolls on each side. 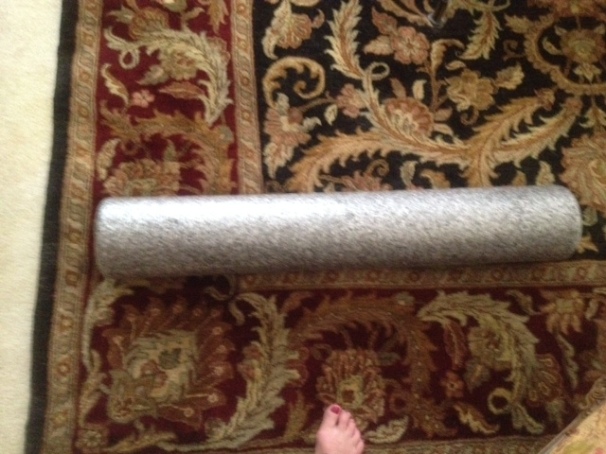 I’ve graduated up into the miles where anything that rubs on the skin can cause it to look burned, scraped or even bleed.  I have some places that will probably heal up pretty fast.

Today’s run took a little more than 4 hours if you eliminate the stop we made.

I didn’t use the Map My Run App instead used Dolores’s pedometer to count miles.  The first 10.5 were 12 minute miles.

Dolores was so thoughtful, she rode ahead (an extra 2 miles bringing her total to 21 miles) after I hit mile 17 so she could get the car and bring it to the mile 19 point.  There is a road that intersects with the trail there.  I’m glad because it was time to hit the bathroom.

This was the first day I wasn’t soaking wet with sweat when I finished.  The air was so cool.   Wonderful!

I only have one more really long run left.  It’s in 2 weeks.  Then I begin to taper.  I am so glad.  Will be living on Ibuprofen for a few days.

Click below and then read on.  I love this song and I think it describes the state of mind I feel when I am pushing beyond my limits.

The challenge.  The sacrifice.  To be the best I can be.

More than that, for the spiritual aspects.  When you push your body to such limits you experience things that you normally wouldn’t and  it puts you in a state of mind similar to meditation.

Running along that trail causes me to feel my Father’s spirit.  He loved riding his bike there.  I look up at the bluffs and think of when he was with me looking at them too.  It was his voice I heard in my head after Dolores said storms were coming.  His voice saying, “Don’t be on the trail during heavy rain…it could be treacherous.”

When I ran my first half marathon and I was so cold and wet for so long,  I was in the Northern section of Central Park.  Feeling isolated and alone – a little scared and unsure, I felt the presence of my parents.  That was the first time I experienced this feeling.

Praying during a run for me?  It’s natural.  It goes hand in hand with long distance running.  That’s my favorite part.  Being at the ends of what I think I can tolerate, in a prayerful state and then…pushing beyond that.

That is what I run for.  I can’t get to that point doing anything else.  So thankful I’m able to do it and have the support of others to help me see it through.

Today’s run as well as all of them – offered up for all those on  my prayer list.  If you want to be added to it, let me know.

This has been a long journey that began about 10 years ago.  I dreamed of running a marathon.  I started in 2010 with a half (13.1 miles) and since then have finished 4 half marathons.  Now, in a month, I will run a full marathon (26.2 miles).  Once I pass mile 20, reaching beyond anything I’ve ever done before, know that I will be praying non-stop till I finish and my parents…will be at my side, running with me.

12 comments on “The Spiritual Miles of the Longest Runs”