After Church I picked up Mary Jo and we headed out to where else??? Mary’s Home.  Look it up if you aren’t familiar with it.  In the Annepedia it is listed as God‘s Country.

Our Mom’s family had a farm there.  Here’s an aerial photo of the place.  The house is covered by the tree line in the upper right corner.  There were many buildings and barns. 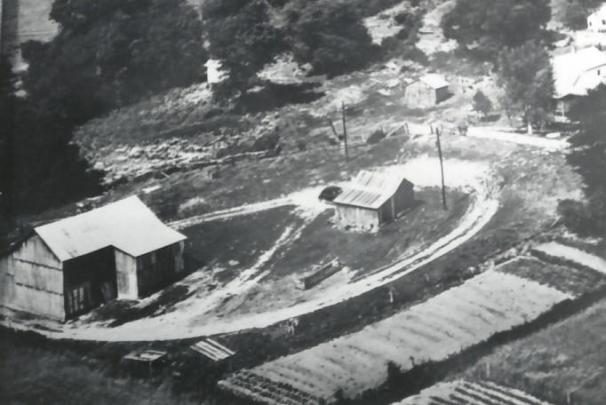 Our Great-Grandfather, August Frederic Schulte, was one of the pioneer members of the community and of the first Catholic Church there – St. Mary‘s.  He donated the stone for the foundation of the Church which was built in 1883.  On New Years Day in 1901 it was destroyed by fire.  The new Church, Our Lady of Snow’s was built following that tragedy and still stands today.  It was the church Mom and Dad were married in back in 1950.

Out of the 14 grandchildren of his son Lambert, Josephine Schwaller (my Mom’s sister), is the only surviving member.  She is TOUGH – with all caps and bolded letters for sure.  She’s still standing strong after enduring hard times and many tragic losses as well as injury.  That includes spending a year in the burn unit at Missouri University Hospital with more than two thirds of her body covered in third degree burns.  She made a quilt for Alex when I was pregnant with him.  It’s something both I and Alex still treasure.

When I showed Josephine the picture I took, she commented that she used to look a lot better than that…  Josephine was my Mom’s maid-of-honor in her wedding.  She is beautiful to all who know her…always.

Josephine is pretty special as is our Aunt Betty Schulte who was head cook for the picnic which serves more than 3,000.

Betty was married to Justin Schulte (Mom’s brother).  She has quite a large family of her own.  Here’s a picture of Betty with her children and grand-children.  Great picture Betty! 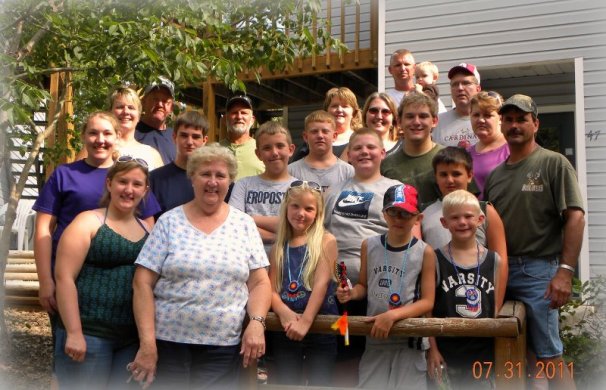 There is no shortage of fun at the picnic…  Mike, Josephine’s son was sharing some fond memories and having a few laughs with us.

Hey, what would a picnic be without beer.  I’m not a beer drinker but the beer served here is always good.  The food and drink is not on my runners diet but it is on my funner one.  Today called for the latter, being with family and the funner diet. 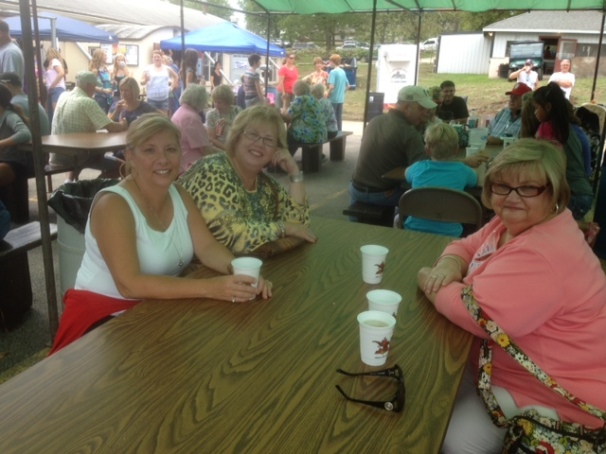 Also, tomorrow is Mary Jo’s 60th birthday!  She is pictured above on the right. So, go to her Facebook page and wish her happy birthday.

Now when Tuesday rolls around and it’s time to hit the running again.  I’ll look back on today and wonder why I didn’t stick to my “Runners Diet.”   Whatever…

Here’s my favorite video of times past with the Schulte’s.  I know I show this a lot, but it never gets old.

2 comments on “The Mary’s Home Picnic”