I was at my sister’s house last night and some much-needed rain came our way.    It brought pea size hail with it too. 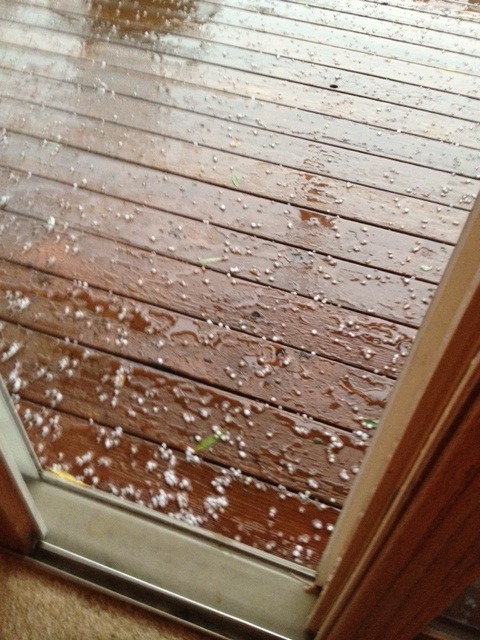 The temperature dropped a good 20 degrees when it was finished.    Hope the hot weather is gone for a while.  July was the warmest month on record in U.S.

Cheers to all those who have to work outside in those temperatures.  Also, to all my fellow runners out there training in the heat…you are running warriors.  The image below is courtesy of St. Louis Rock and Roll Marathon.

I had a pretty good week.  Rode my bike to work on Monday (8 miles of cross training).  Then ran some too.  Building towards my long run on Saturday.  Going out running this evening before the sunsets.  I’m always looking for new places to run.

I need new running shoes.  I have my Vibram‘s but I can’t run every day in those and not too far either.  Still getting used to the barefoot running thing.  Would like to get a shoe that is in line with or step towards the barefoot feel though.  The last pair I purchased was in March of 2011.  I’ve been in 2 half marathons since then.  They were good shoes though.

So, I went to Tryathletics in Columbia tonight in search of “the perfect running shoe” for me.

I wanted that minimal feel of a lighter shoe – I seem to run faster in those.  Yet the nice man I met there at the store and who does a lot of running himself, convinced me that maybe I better get something that has a little more support.  Therefore I bought a pair of each.

These are the shoes that are going to carry me through 26.2 miles in October.  That is only 10 weeks away too.

The guy that was so informative also had a pretty impressive story.  He shared some of it but this is what I found on their website after I got home.

Steve Stonecipher-Fisher has lived in Columbia for 33 years and opened Tryathletics in 1986. He has been married to his wife, Kim for 28 years and has a son, Ryan. Steve is involved in many local events and is race director for The Show Me Games Triathlon and St Patrick’s Day 5k among others. He brings years of experience to Tryathletics and his customers.

Steve began running in 1971 on the Sedalia high school track and cross country team. He also ran for the University of Missouri track and cross country teams. Steve still holds the 3 mile indoor record at MU which he set in 1978. At the 1983 Boston Marathon, he place 37th in a time of 2:16:36. This feat qualified him for the 1984 Olympic Trials marathon. Steve placed 40th at the trials with a time of 2:22. This experience and his friendly attitude toward people make Tryathletics a great store to shop for your running, biking and swimming needs.

Thanks to Steve for helping me find those perfect shoes (both pair).  Can’t wait to run in them tomorrow.

This Sunday is the 2012 Men’s Olympic Marathon at 5 am again.  To get in on the Breakfast of Champions, family must arrive by 4:30 am.  Jim didn’t get that last week.  He came down after race began.  Too late for breakfast.  Everyone gets another shot this week though.

What is a “Breakfast of Champions?”

That just gets fixed though if someone is here before 4:30…otherwise it’s the usual protein bar and coffee.