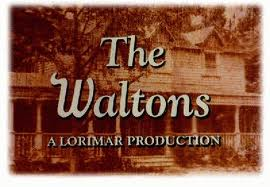 I loved the Waltons.  It was one of my favorite shows growing up.  They were on the Today Show with Matt Lauer yesterday.  It’s the 40th anniversary of the show.  Several of the surviving cast members were present for the interview.

I watched reruns of the episodes over and over again.

I think it was the strong family theme that drew me in more than anything.  Also, the scenery.  The clips they showed of the mountains were so picturesque.

I had an aunt and uncle that lived in Arlington, VA during that time.  On one of the trips out there my uncle took my Dad and I up into the Blue Ridge Mountains.  The mountain stream we came upon was over-flowing and flowed with the speed of white rapids.  It prevented us from going further up the mountain.  However, we were already  surrounded by the beauty and mysticism of the peak we were on – it was breath-taking.  I remember, I wanted to take it all in like a sponge absorbing it into my memory so I would never forget any of it.  Both my aunt and uncle are gone now but that memory is still ever present and any hint of that time or place, brings it all back.

If you have not ever watched an episode of the Waltons – do so.  Then go run.

Here’s your morning dose of inspiration.

2 comments on “Who Remembers the Waltons?”